Things A Landlord Needs To Know Before Renting Out A Property

The Top 10 Construction Failures Of The World

Guide: How To Set Up And Promote Your Own Consultancy

5 Ways To Boost Morale In Your Business

Home Blogs 8 Things To Consider Before Starting A Consultancy Business 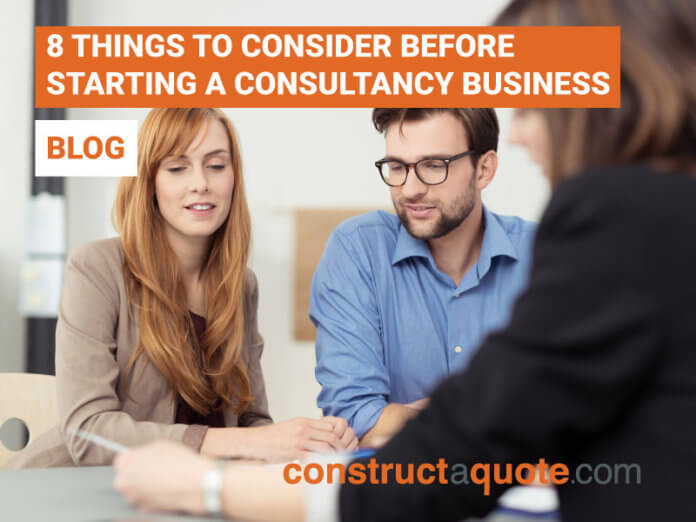 Consulting can be wonderful. You’re likely to be earning more, you’ll usually be in charge of your own working hours, and you’ll meet lots of (mostly) incredible people. If you can make it work for you, it can transform your life. Like most things, you’ll learn as you go and wish you had known those things in the very beginning. So, we thought that we would help by listing what we think all consultants should consider before they get going…

1. It’s not for the feint hearted

Because of the benefits of being a consultant, it’s competitive. You’ll have to know your stuff, have the ability to prove you know your stuff and be a real people person. Some clients can be ruthless and pull their contract from you without any warning – even if you’ve got an agreement in place. Don’t take rejection personally, many businesses are forced to cut costs and the luxury of a consultant can usually be the first cost they cut.

2. It won’t be plain sailing

There’ll be times when you have so much work on that you’re working 12 hour days. There’ll be other times when all of your projects are over and you have nothing waiting for you. It will all be worth it though, because everything you earn will be going into your own pocket. You won’t be overworked without reward in the same way you might find you are if you’re slaving away for an employer.

3. You’ll need to market yourself constantly

Don’t wait until the quiet times to let people know that you’re out there. You must market yourself as much as you can, even when you’re busy. The only way you’re going to get hired is if people know about you and what you do. Use LinkedIn, social media and networking groups to meet as many people as possible.

4. In the beginning you’ll be charging people too little

You’ll be nervous the first time you quote someone for work, so you’re likely to quote potential clients less than they’ll be willing to pay. This might mean you get the work, but you’ll be wondering whether or not you could be working for a more decent pay packet. Under-quoting can also backfire. Think about it, if you visit two separate shoe shops and one is charging considerably less for the same pair of shoes, you’re more likely to wonder what’s wrong with the cheaper pair than think the more costly store is trying to rip you off.

We’d like to tell you a story. Once there was a huge factory in which hundreds of people worked. One day a vital piece of equipment broke. Everything ground to a halt. Nobody could do their job and products were not being made. It was disastrous. The manager of the factory was faced with the prospect of telling his clients that he couldn’t supply them and was at a loss of what to do. In the end he called out an emergency repairman (that’s you!). The repairman visited the factory and inspected the machine from all angles for around ten minutes, then he moved to his toolbox and took out a hammer. He marched over to the machine, inspected a particular spot and then whacked it as hard as he could. The machine whirred back to life. The factory rejoiced.

When the repairman presented his invoice, the manager was infuriated to see he had been charged £10,000 for the work.

“This is ridiculous!” he said, “I’m not paying you £10,000 for ten minutes of work and a hit with a hammer. I would like an itemised bill that justifies this, please.”

The repairman wrote a few things down on his invoice and gave it back to the manager. It said, “Hitting the machine with a hammer cost – £1. Knowing exactly where to hit – £9,999.”

Not everyone can do what you do. Make sure you never let anyone tell you that this doesn’t mean anything.

6. You should definitely consider an accountant

You may think that you’ll be strong willed enough not to spend your tax money, but it’s best not to take the risk. If you’re serious about being a consultant for the foreseeable future, hiring an accountant is a wise move. They’ll deal with everything, from paying your taxes, claiming your expenses and paying your pension. They know the best way to make claims for things like using your own electricity if you are working from home (which you can totally do, if you didn’t know).

7. You need to make sure you can do it financially

Do the sums and make sure you can survive for a few months without work. If you couldn’t then you need to get yourself some money saved up before you step into the consultancy world, as there are no guarantees. If you ever find yourself without work then having that money in the bank will alleviate lots of ‘how are we going to pay the bills’ type stress.

If you’re sick there is no pay. You could probably power through a head cold or the flu, but what if something worse were to happen? You might feel healthy now, but you don’t know what might happen in the future. Insurance is also important to protect yourself from potentially expensive client claims. If something were to go wrong and the client claims you provided negligent work, without insurance you would liable for any claim costs and legal fees. Consultancy insurance will give you that peace of mind.