What’s the difference between a courier and a haulier?

Liability insurance: what is it and do I need it?

Save money with the 5 best SIM only deals 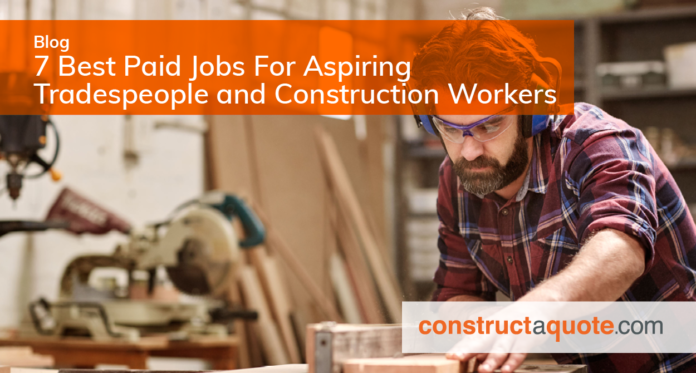 Money isn’t everything, but it is and likely always will be key to a healthy and enjoyable day-to-day lifestyle. So what’s the most lucrative route to go for a career either in construction or a trade? Here, we look at the latest official figures for annual earnings, along with up-to-date job board insights to salaries.

Looking to jump into the highest paid trade? Look no further than electrical work.

According to the latest figures released by the Annual Survey of Hours and Earnings (ASHE) back in 2015, electricians and electrical fitters rake in an average of just over £30,000 annually. Not bad, hey?

Even better is the fact that, according to job site TotalJobs, the average position listing posted now comes in at an impressive £32,500!

Coming in at second place are plumbers, the heroes working around the clock to ensure that clean water is delivered to us without hassle.

ASHE figures show that the average annual salary for the category containing plumbers fell just short of £29,000. That’s better than the UK average full-time salary of £27,600!

While up-to-date figures for the average UK salary are yet to be released for 2017, job listings received by TotalJobs also show a big inflation boost for plumbers with just over £31,750 advertised on average.

This title naturally fits more into construction, but with the unfortunate skills crisis in full swing and demand higher than ever, steel erection is something to consider.

Official figures from 2015 show the average wage standing tall at a smidge over £27,000, which is good in its own right, but a look at TotalJobs reveals a current average of £33,700.

Everyone loves a well finished tiling job on a bathroom or kitchen – and the demand is clearly having an impact on annual earnings for tilers.

Latest figures show the average salary for tilers working full-time is over £26,000, dipping below the UK average for the first time on our list.

According to TotalJobs, however, the average job listing for tilers is currently advertising earnings of over £28,000 – another £2,000 inflation bump!

From the foundations to the finishing touches – carpentry is something many people appreciate.

On first glance, though, the average annual earning for carpenters is another sitting below the UK’s overall average – at £25,300.

There’s an impressive increase when we take a look at TotalJobs, though, with a huge £6,000 bump to £31,700 currently considered to be the average carpentry salary based on over 250 advertisements!

Despite some worries regarding robots potentially overtaking the bricklaying duties of human workers in the future, the average annual earnings for the role are solid.

Official rates from 2015 show the average at £24,300, and while that figure was 1% down compared to 2014, more recent numbers from TotalJobs suggest bricklayer earnings to now be well over £30,000.

Plastering may be bottom of our list, but that doesn’t mean it’s the worst paid job between trades and construction.

In fact, the average salary for plasterers is one of the fastest growing in this list. In 2015 the official figure stood at £23,500 – a huge 5.5% increase on the previous year.

Adding to that, there are indications that this salary growth has continued, with the TotalJobs salary aggregator also listing plastering earnings beyond £30,000!

Considering a career in trade or construction? Make sure you protect your business and yourself with the correct insurance policy here.