A guide to GDPR for professional consultants

Why use an insurance broker?﻿

Home Blogs What Technology Is Disrupting The Construction Industry? 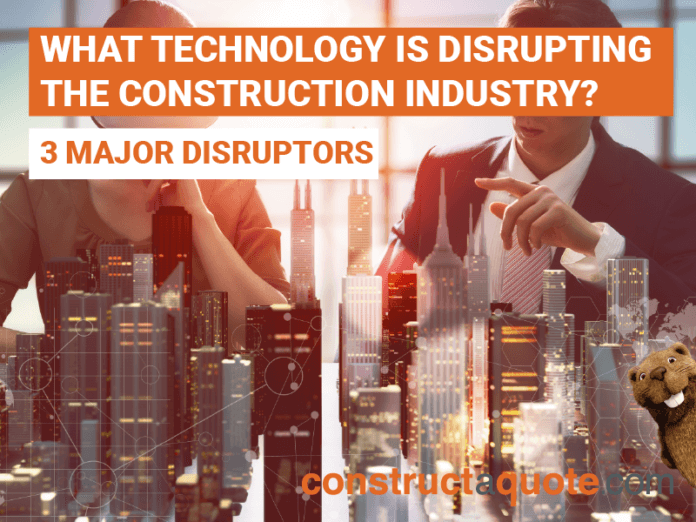 The construction industry is one of the least efficient industries, and this is slowly becoming a global issue affecting the environment.

Although we’ve seen developments in more eco-friendly building materials such as pre-fabrication and modular construction, almost every building that is larger than the average house is still designed as a one off design and constructed piece by piece on site.

From the initial design phase all the way through to completion, there are many inefficiencies of todays standard construction methods.

Luckily, the advancement of technology is starting to serve its purpose in the world of construction. Whilst technology can benefit the environment and offer more efficient building methods, some see these advancements as disruptors of the construction industry.

So, what technology is disrupting the construction industry?

Before any new project can begin, the construction site must go through crucial inspections to detect any potential issues with the land and understand key factors such as drainage, soil, space, vegetation etc. During the process of the project, additional inspections are also required to assess the levels of safety, compliance, quality and progress of the job.

Traditionally, and still most popular today, these inspections are carried out manually. Not only are they time-consuming but can also be very dangerous to execute in certain developments. For instance, an inspector would have to detect any potential risks in a skyscraper that may have weak beams, which puts the inspectors life at risk.

But there is now a solution to this problem – Drones.

Drones are now starting to be used to carry out these inspections. They can cover a wide area in a short space of times making them very time-efficient and reducing the amount of labour required. They also have high quality lenses that can capture detail close up, oftentimes even better than the human eye. They then transfer this captured data to real time computer systems that can monitor and react to the data received.

Collecting digital data from drones allows construction workers to analyse an area before and during the construction process. Builders can perform pre-construction simulations giving them the advantage of testing out different designs before starting the project, whilst lowering the risk of error and danger.

With 3D printing advancing over the last few years, it’s now becoming more and more popular in the construction industry allowing concrete structures to be built at high speed. The technology is also being used to create more complex construction objects such as uniquely shaped, curved, layered and artistic structures for modern buildings.

The benefits of 3D printing, again, comes down to efficiency. The labour costs of creating these items by hand and the speed at which it takes to create them manually is eliminated.

Robots are starting to make waves in the construction industry by automating processes that are time and labour intense when done manually. Tasks such as constructing beams, bricklaying, drilling and painting can now be done by robots which can be controlled by technicians remotely around the world.

Previously we did a post on Sam, the bricklaying robot that threatens to put bricklayers in the UK out of work. The robot is said to be capable of laying up to 3,000 bricks a day putting bricklayers out of a job.

Whilst robots are set to be major disruptors in many industries, there will first be a transition period which will see humans and robots working together. However, eventually the need for humans to carry out simple tasks will be almost unnecessary and replaced by robots.

“Five years ago I’d have smiled wryly if somebody had said to me that robots would be able to put up buildings in the City of London – I tell you we’re not that far off, and that has huge implications.” Carnwath also warned that businesses “want to reengineer how their people can work, they recognise that technology is upon us and is going to destroy thousands of jobs.”

Whilst these technologies have benefits to the construction industry when it comes to efficiency, they are deemed disruptors as they could be responsible for putting many construction workers out of work. There is currently already a skills crisis in the UK with a majority of older tradesmen lacking the skills and experience needed to use new technologies. These advancements will put further pressure on the industry to catch up before it’s too late and they’re replaced my technology for good.

Now checkout this infographic on the UK Skill Crisis