How To Network As A Tradesperson

Home Blogs Carillion Collapse: What Does It Mean For The Construction Industry? 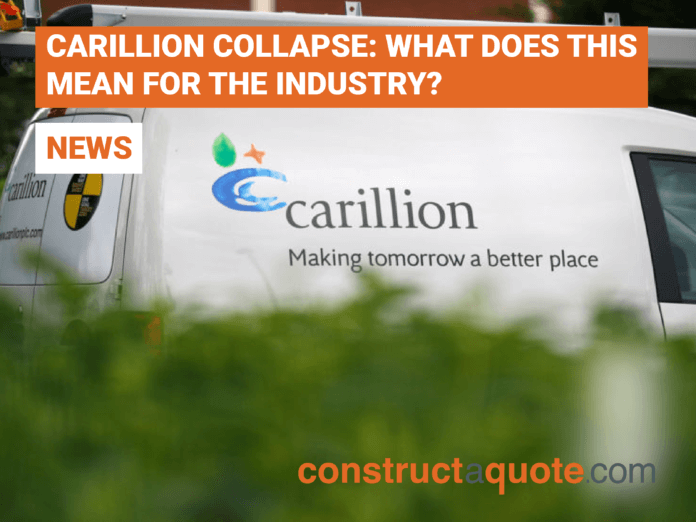 Construction giant Carillion has announced it is going into compulsory liquidation.

The news first broke Monday morning, an hour before the London stock exchange opened. However, the company has been in trouble since July 2017.

Carillion is involved in some of the UK’s biggest projects such as the HS2 high-speed rail line and also responsible for managing many of the UK’s schools and prisons. It is also the second-biggest supplier of maintenance services to Network Rail and maintains 50,000 homes for the Ministry of Defence.

Trouble for the company began after money was lost on contracts causing the company to run up substantial amounts of debt. The three main projects affected are:

The news of liquidation comes after talks between the firm, its lenders and the UK government failed to reach an agreement to save the company. It is now down to the government to ensure that the outstanding projects on public services continue to run.

Carillion chairman Philip Green said it was a “very sad day” for the company’s workers, suppliers, and customers.

What does this mean for the construction industry?

It’s still early days, and the exact impact that this will have on the rest of the construction industry is currently unknown. However, with major projects still needing to be completed, this could open the door for rivals and smaller construction companies throughout the UK.

Carillion’s contracts are likely to be taken on by other firms. However, it is not yet clear which ones or how long the process will take.

According to David Lidington, the minister in charge of the cabinet office which oversees the running of the government:

“The government’s priority is to ensure that public services are not disrupted. Some contracts handled by Carillion would go to alternative providers.”

Lidington also clarified that the company’s staff should carry on going to work and said the government would pay their salaries.

As a result of the news, shares in rival businesses such as G4S, Balfour Beatty, and Kier Group advanced in the hope that they would win some of the outstanding work.

Kier boss Haydn Mursell gave Carillion workers a glint of reassurance by saying “Carillion’s HS2 joint venture partners have a contingency plan in place for the project” – which could include transferring the staff.

For the many smaller firms that currently have contracts with Carillion, the news poses major risks for company bosses worried they may not be paid for their work, making them unable to pay their workers and subsequently causing them to fail too.

The uncertainty for the thousands of construction workers working for these firms, means we are likely to see an increase in self-employed tradesmen over the next few months.

Thinking of becoming a self-employed Tradesman or setting up your own construction company? Check out our simple guide here…