A Guide To Health and Safety Inspections For Landlords

5 tips to grow your business quickly

Home Blogs The skills crisis in 2018: who will be the winners and losers? 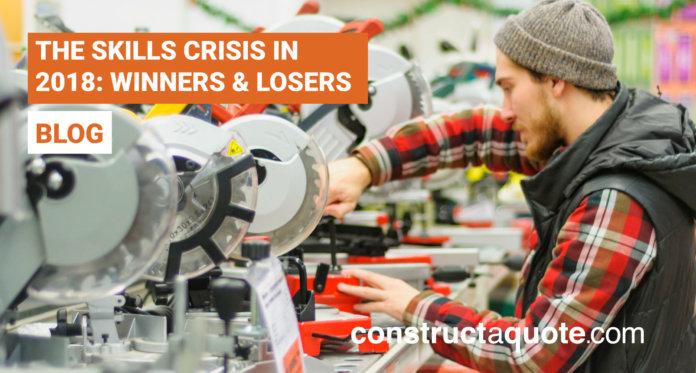 In 2017, we outlined the growing issue of the skills crisis in the U.K with an increasing need for skilled construction workers in small and medium-sized construction firms.

Now in 2018, with the Government’s plan to build 300,000 new homes this year, the skills crisis has become even more apparent.

The shortage of skills is causing the demand for skilled tradespeople to significantly rise along with a spike in wages and skyrocketing the prices for materials resulting in smaller profit margins for small and medium firm owners.

The FMB findings also revealed that 87% of builders believe that material prices will rise more over the next six months and 61% expect salaries and wages to also increase over the same period.

A lack of skills means that project deadlines are being missed, many jobs are not being completed at all and some firms going out of business.

2017 was full of uncertainty regarding Brexit, and it’s likely that a reduced EU workforce in 2019 could result in an even higher shortage of skilled tradesmen. FMB chief executive, Brian Berry is calling on the government to take account of the worsening situation and allow free movement of people.

However, Brexit has only highlighted an issue that has been around for years, and non-UK workers have merely been a quick fix to a big problem.

For years the U.K. Government has focussed on increasing graduate numbers rather than encouraging young people to pursue a career in the trades. This has led to fewer people considering an apprenticeship in construction and instead opting to go to university.

Youngsters need to be assured that a skilled trade is also a respectable career option and offered the relevant courses and training to pursue a career in the industry.

However, we did have some promising news during the 2017 Autumn budget when the Chancellor announced his plans to set aside £204 million to train young trade professionals. The government has also announced plans to introduce new technical vocational qualifications (‘T Levels’) along with increased hours of training for youngsters by 50%. Unfortunately, the current poor state of the skills crisis still remains.

The news of the recent Carillion collapse will have come as a big shock to smaller firms that have contracts with the construction giant. It has also left young apprentices who were actively studying under the Carillion apprentice program in limbo with no clear way to progress in their career at the moment.

However, there is a silver lining for the skilled workers that are facing redundancy as the demand to fill the skills gap could mean they stay at their current work or find an alternative job fairly quickly.

Smaller firms all need to do their bit, along with the Government and the CITB (Construction Industry Training Board) to ensure that young tradespeople aren’t put off by an already uncertain industry and continue to develop the skills needed to work in construction. Providing quality apprenticeships to 16-19-year-olds could help get the industry back on its feet again and meeting project deadlines.