Over one million construction workers needed by 2020

5 Marketing tools every small business should be using

Home Blogs What does 2018 mean for tradesmen? 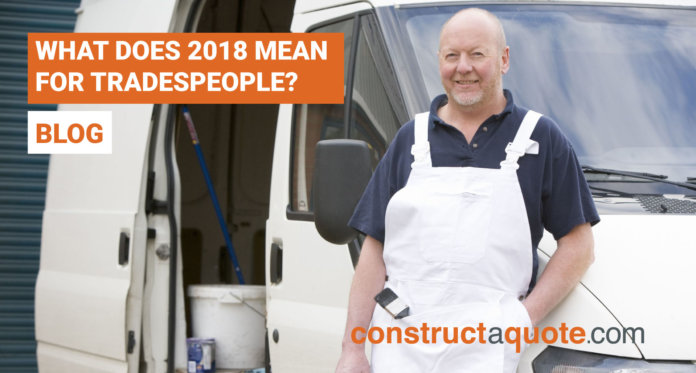 After a turbulent and uncertain 2017 (mainly because of Brexit) and with 2018 in full swing, many tradesmen will be keen to grow their business and take on as much work as they can this year. But first, there are a few changes occurring in 2018  that tradesmen and women need to consider.

Good news for van drivers as vans will be exempt from new changes in vehicle tax. In the autumn budget, Chancellor Philip Hammond stated that there would be an increase in diesel tax. However, he reassured tradesmen by saying “No white van man or woman will be hit by these measures.”

Funding to fix the skills crisis

We also heard in the Autumn budget that the Chancellor is setting aside £204 million to train young trade professionals.

The government will also be introducing the new technical vocational qualifications, also known as ‘T Levels,’ and increasing the hours of training by 50% for technical students aged 16-19.

With the government’s initiative to build 300,000 new homes each year for the next five years, £15.3 billion of additional funds have been made available to facilitate the construction. This is good news for small firms and independent tradesmen.

Many people were shocked by the sudden news of the Carillion collapse, but for many tradesmen, the announcement of the collapse has caused a lot of headaches; particularly for smaller firms that rely on Carillion contracts as their primary source of revenue. Many of these firms will struggle in 2018 and some will even close, resulting in many tradesmen out of work or being forced to go self-employed.

For tradesmen working in London, changes are being made to the congestion zone fine that could affect them. In December, the government announced the introduction of the T – Charge, an initiative to reduce pollution in the capital. This means that the fine for failing to pay the charge will increase to £160, or from £65 to £80 if the penalty is paid early.

Tool theft is on the up

At constructaquote.com, we covered tool theft a lot during 2017 as there were 22,749 cases of tool theft and van break-ins. However, the rise in these crimes is still on the up and is likely to continue into 2018. A recent report found that a £20 ‘skeleton key’ is being purchased by thieves online and used to access a variety of vans.

Tradesmen need to consider effective ways to increase the security of their vehicles and premises in order to prevent expensive tools from being stolen. They should also protect their business should theft or damage occur by taking out tool insurance.

Find out more about how to protect your tools and vehicle here.

2017 saw the horrific Grenfell Tower tragedy which triggered an interim report on building regulations and fire safety. Published by Dame Judith Hackitt, the report recommends significant changes to regulations across the industry.

It is predicted that the changes to the regulations will come into effect during 2018 and tradesmen should make a conscious effort to familiarise themselves with the new rules and regulations affecting their work.

New changes to wiring regulations will be announced in July this year. While they mainly only affect electricians, other trade roles should take the time to have a basic understanding of the changes.

Co-published by the Institution of Engineering and Technology (IET) and the British Standards Institution (BSI), the 18th Edition updates are likely to be wide-ranging and will affect the whole electro-technical industry.

All electrical installations designed after January 1st, 2019 are legally required to comply with the new regulations.