Why A Digital Presence Is Essential For Your Consultancy’s Success

Home Blogs UK manufacturing and IT sectors continue to thrive 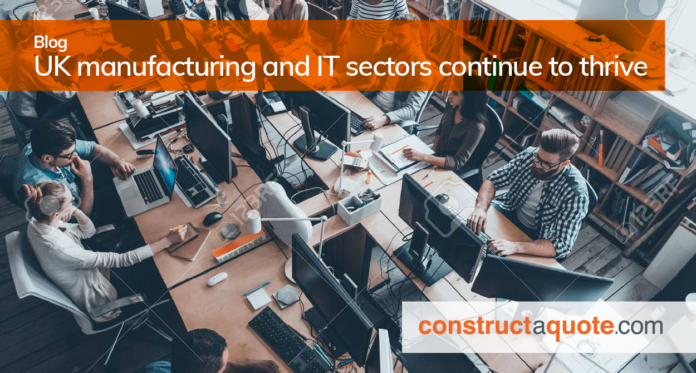 The UK’s manufacturing sector continues to thrive with Britain currently ranking as the 8th largest industrial nation, according to The Manufacturer.

UK manufacturing contributes a staggering £6.7 trillion to the global economy and if this trend continues the UK will break into the top five by 2021.

Manufacturing also continued to recover after weakness at the end of last year with the often erratic pharmaceutical industry, chemicals, and alcohol performing well in recent months, says the Office of National Statistics (ONS).

What is professional indemnity?

Source: Every year Hennik Research publishes the Annual Manufacturing Report. Here are the key findings from the 2019 report (released in February 2019).

The ONS attributes the sustained growth to a better quality; more skilled workforce; a shift in production from low to high productivity goods; improvements in automation and technology; increased investment in Research and Development, and a more integrated global economy, states a report in The Manufacturer.

In an article in The Guardian, Ian Stewart, chief economist at accountancy and consulting group Deloitte, said: “The UK is proving more resilient than expected in the face of a global slowdown and Brexit headwinds. The pace of growth could be choppy, but the UK is likely to grow at about the same pace as the euro area this year.” According to the International Monetary Fund, the UK will grow at 1.2% this year, compared with 1.3% for the Eurozone.

Meanwhile, the UK’s IT sector is placed in the top 5 when it comes to salaries and job opportunities, according to ITPRO.

The latest GDP figures showed growth remained unchanged at 0.3% in the three months to February 2019. Services again drove the economy, with a continued strong performance in IT, according to the ONS.

Using job market data from 2018, CV-Library found that pay was up 4.3% in IT, with an average salary in the field being a comfortable £44,100. The number of jobs emerging in the industry also surged by 19.7%, making the industry the fourth most prosperous in the UK, says a report in ITPRO.

Five ways for IT consultants to create goals and succeed

Be precise – Setting goals can be a time-consuming and difficult thing to do according to ChannelPRO but consultants need to have precise aims and goals to work towards. Create a step-by step breakdown of how to achieve these goals by a certain timeframe…and stick to it.

Reflect – It’s a good idea to take a step back at times to reflect on what you’re doing and how far you’ve come. Taking time to reflect on the work you’ve completed for your clients will allow you the space to think about what you did well and what you could improve on and who is accountable for working on the details of the goals.

Referrals – There is nothing wrong in asking a client for a recommendation and a referral if you’ve done a great job. The client might be more than happy to do this and in the process you gain introductions to new clients.

Plan – It is important to plan with your client to ensure all parties have a vested interest in the outcome. By involving them as much as possible in project planning and implementation, they are much more likely to implement the plans completely and learn at the same time.

Problem solve – The approach to problem solving should always involve your client’s learning about what is being done and why, so that later on your client might use similar approaches to solve similar problems after you have left the project.  It is vital to regularly identify learning during the project, and discussing that learning with the client.

Disclaimer: The advice provided here are our own interpretations and opinions. We have tried to simplify the main points to create this article and the information provided is for general informational purposes only. While we try to keep the information up-to-date and correct, there are no representations or warranties, express or implied, about the completeness, accuracy, reliability, suitability or availability with respect to the information, products, services, or related graphics contained in this blog for any purpose. Any use of this information is at your own risk.