Can it get any greener for construction firms?

How To Buy A Used Van

Home Blogs Is ‘No Deal’ the best deal for UK construction? 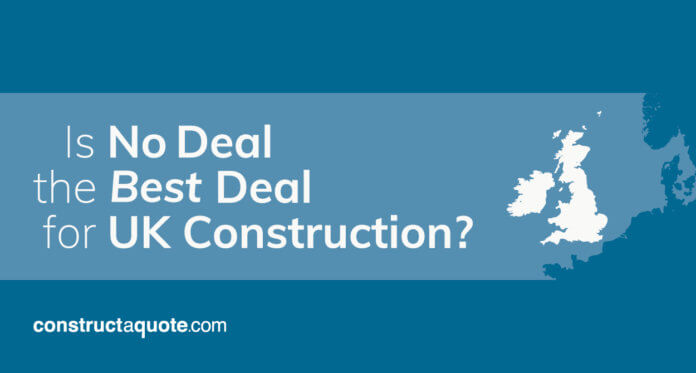 According to a recent report by www.designingbuildings.co.uk just 15% of construction executives favoured a UK exit from the European Union (EU).

In recent times the Bank of England declared a no-deal
Brexit could wipe 8% off the UK’s GDP this year – a bigger hit than the financial crisis – potentially taking 30% off house prices, according to a report in www.building.co.uk.

And yet with just 3 weeks to go until the UK potentially pulls out of the EU with a No Deal Brexit, there are clearly vital potential issues about to affect thousands of businesses around the country – from a lack of clear guidance on regulations, to a shortage of skills, and a potential lack of access to building materials.

One obvious major concern is the ‘divorce’ could potentially result in a lack of free movement which Prime Minister Theresa May is adamant should take place.

Surely this means the skills shortage could worsen and the UK could become a victim of higher development costs whereby labour demand outstrips supply?

Figures from the Office for National Statistics indicate that one-third of workers on construction sites in London are from overseas, with around 28% coming from the EU. This calls into question the range of skills this one-third has acquired given that construction sites need a combination of skillsets to complete work from engineering to bricklaying.

On the one hand the knock on effect of a lack of free movement could result in the decline in the number of houses being built resulting in construction firms failing to meet the government’s housing target thus deepening the crisis of a lack of housing in large cities.

On the other hand, if investors pull out of the UK, house prices could drop – leaving more empty properties available on the market. Either way, it’s difficult for construction firms to know what to prepare for as Britain meanders its way through unknown territory.

A 2010 study by the Department of Business Skills and Innovation estimated that 64% of building materials were imported by the EU. The same report estimated that 63% of building materials manufactured in the UK were exported to the EU. After Brexit, importers and exporters may face duties or limits on quantities, which could result in an increase in costs, or a shortage of, construction materials.

Brian Berry, Chief Executive of the Federation of Master Builders, says in a recent press release: ‘The single biggest issue keeping construction employers awake at night is the skills shortage. If we’re going to address this skills gap post-Brexit, the whole industry needs to step up and expand their training initiatives. Even Sole Traders can offer short term work experience placements and large companies should be aiming to ensure at least 5 per cent of their workforce are trainees or apprentices.

‘But realistically speaking, the UK construction sector can’t satisfy its thirst for skilled labour via domestic workers alone. With record low levels of unemployment, we’ll always need a significant number of migrant workers too – particularly in London and the south east.

‘The Government needs to work with construction to amend its Immigration White Paper and rethink the current definition of low-skilled workers. Level 2 tradespeople play a vital role in the sector and would currently be excluded, which is wrong. We urge Ministers to engage with the construction industry to help improve these proposals.’

The Construction Industry Training Board – www.citb.co.uk, – however, expects positive growth for the construction industry but only in the case of an exit deal as opposed to a no exit deal, according to the CITB’s recent press release.

The annual Construction Skills Network (CSN) report – a five-year forecast into the industry’s skills needs – anticipates construction growth of 1.3% across the UK, down a third of a percent on the previous year. The forecast is based on the scenario that the UK agrees an exit deal with the EU, rather than a ‘No Deal’ situation.

The biggest increase is expected in public housing, which is pulling ahead as infrastructure slows. Financial support from Government at both local and national levels is encouraging a 3.2% growth rate in public housing, up half a percent since last year’s forecast.

Infrastructure is set to grow by 1.9%, down from 3.1% predicted in last year’s forecast. The sector has been heavily affected by Brexit uncertainty and by investors stalling construction of the Welsh nuclear power plant Wylfa in January.

Commercial construction is significantly declining due to investors taking a cautious stance in the face of Brexit. The forecast expects the sector to drop sharply this year then level out by 2023, with zero growth anticipated overall.

However, the housing repair and maintenance sector appears to be benefitting from a quieter property market as home owners halt plans to sell up and instead focus on improving their current properties. By 2023, the sector is expected to have grown by 1.7%.

Steve Radley, Policy Director at CITB, said: ‘This forecast aptly reflects the uncertainty, particularly associated with Brexit that we’re seeing across the wider economy. Currently, concerns around Brexit are weighing on clients and investors, creating a knock-on effect on contractors and their ability to plan ahead.

However, assuming that a deal is agreed, we expect low but positive growth for construction.  Even as infrastructure slows, sectors like public housing and R&M are strengthening. This will see the number of construction jobs increase over the next five years, creating growing opportunities for careers in construction and increasing the importance of tackling the skills pressures we face,” he said.

Whether one prefers the notion of a road to opportunity or the wake-up call of a No Deal Brexit, the clock is ticking for the UK’s construction executives as the sector waits for clarity from the UK Government.

Is your business protected for the projects you take on?

The builder’s professional indemnity insurance we arrange can accommodate the kinds and scale of contracts on which you intend to be working – whether you are a sole trader or the owner of a sizeable building company.

Disclaimer: The advice provided here are our own interpretations and opinions. We have tried to simplify the main points to create this article and the information provided is for general informational purposes only. While we try to keep the information up-to-date and correct, there are no representations or warranties, express or implied, about the completeness, accuracy, reliability, suitability or availability with respect to the information, products, services, or related graphics contained in this eBook for any purpose. Any use of this information is at your own risk.