Diesel or electric: which van is more economical?

How To Protect Yourself From Tool Theft

6 Top Brands All Tradesmen Should Recognise 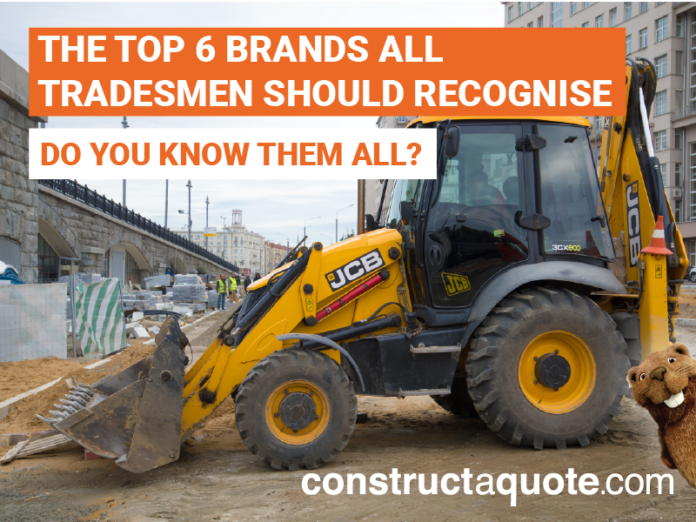 Here at constructquote, we thought we’d do some research to find out which brands, UK and Globally, are the most recognised amongst tradesmen and the construction industry as a whole.

With so many successful companies in an ever growing industry, here’s our top 6 that we think all tradesmen either already recognise – or should recognise.

Which ones spring to mind for you?

JCB (J.C.Bamford Excavators Limited) is a globally recognised brand known for their construction manufacturing equipment, agriculture machinery, waste handling and demolitions.  Founded in 1945 by Joseph Cyril Bamford, JCB is a British multinational corporation with headquarters in Staffordshire , England, and is currently still owned by the Bamford family.

As the worlds third-largest construction equipment manufacturer, JCB produces over 300 different types of machinery from backhoes (diggers) excavators, tractors and diesel engines. The company has 22 factories across Asia, Europe, North America, and South America with its products are sold in over 150 countries.

DeWalt is an American brand of power tools and hand tools for the construction, manufacturing and woodworking industries.

The original company was started in 1923 by American, Raymond E. DeWalt, the inventor of the radial arm saw. By 1947, the company had grown rapidly and was soon re-organized and re-incorporated as DeWalt Inc. Today, DeWalt is owned by Stanley Black and Decker – another successful brand known for its power tools.

Selco , also known as Selco Builders Warehouse, is an exclusive trade self-service builders’ merchant for the British construction industry. Originally founded in 1895 as Sewall & Co LTD, it was later acquired by the Grafton Group in 1988 and become a builders’ merchant.

Grafton Group PLC is a UK & Ireland builders merchant listed on the London Stock Exchange and the FTSE 250 index.

Vinci is a 115 year old French construction company with the largest revenues of any privately-owned construction company in the world. The company is known for its effective results in delivering high – profile projects around the world, such as the Stade de France and the Gariep Dam in South Africa and currently working on the €440million express-lane highway system in Atlanta, Georgia as well as Australia’s Wheatstone Liquefied Natural Gas Project.

According to last available figures (2011) the Group employs more than 183,000 people globally.

Dickies is currently sold in all 50 states of the US and throughout the world. Previously known as Dickies UK, Williamson-Dickie Europe Ltd are based in Somerset, England and head up the manufacturing and distribution of products for the whole of europe and the Middle East.

As the 70% dominator of the workwear market, Williamson-Dickie ships on average 100,000 of its bestselling pants each day and operates 28 manufacturing facilities in seven countries.

Founded more than 160 years ago, Otis is the worlds largest and most recognised manufacturer and maintainer of lifts, escalators and moving walkways and operates in over 200 global locations maintaining over 1.9 million lifts and escalators.

The company is part of United Technologies Crop, a leading provider to the aerospace and building systems industries.

Otis became a globally recognised brand after installing 225 elevators and 71 escalators in the the New York Trade Centre in 1968.

Are you a tradesman or construction worker? Comment below and let us know which brands you consider to be the most recognised in your industry.

Need the right insurance for the job? Checkout our resource section and get a quote here.