Changes to how you share your driving licence info

How can you become a trusted tradesman?

constructaquote.com to the rescue after recent floods

Home Blogs 5 essential components for starting a business without money 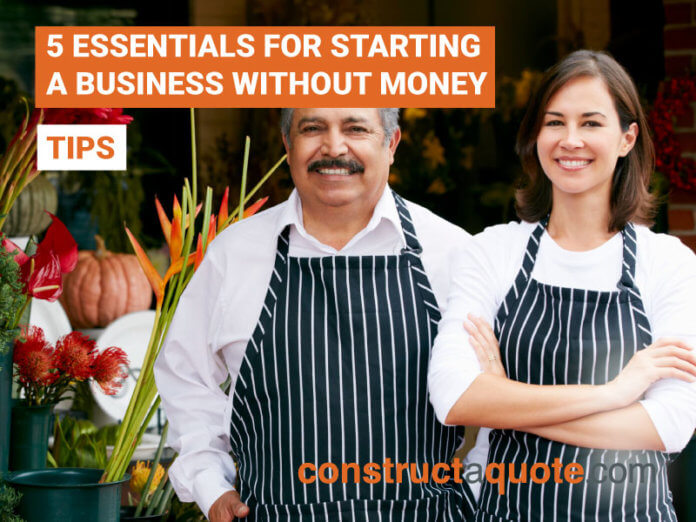 Looking to start your own business but worried you don’t have the funds to do it? No problem. There are many renowned business people out there who started with nothing.

Jan Koum used to sweep floors and collect food stamps. In 2009 he developed Whatsapp, and in 2014, Facebook bought it from him for $19 billion. Oprah Winfrey suffered a teenage miscarriage and fled an abusive home at age 13. Now, she owns a global media empire with a personal wealth of around $3 billion.

If these people can start with nothing and turn themselves into billionaires, then there is no reason you can’t do it too.

Money is not the most essential part of starting a business. You could have millions of pounds in the bank to launch your business and still fail. There are other much more essential components you need to succeed, here are just a few of them…

1. The ability to solve other people’s problems

Most of the things you have ever bought have most likely been because you needed them. They solved a problem and made your life better in some way.

If you’re thinking of starting a business, then you need to consider what it is you’re offering potential customers. How will it make their lives better? What are you doing that nobody else is doing? Why would they choose your product over someone else’s? Even the world’s most exceptional entrepreneurs sometimes get this bit wrong.

In 1994 Richard Branson launched Virgin Cola. He was confident that he could take Coca-Cola and Pepsi out of the market. He was wrong.

“People were already getting a product that they liked, at a price they were happy to pay – Virgin Cola just wasn’t different enough.”

Richard Branson was not short of money when he launched his new product, but it still failed spectacularly. That’s because money is not the most important aspect of starting something new.

If you’re opening a restaurant in a busy town centre, what is it that makes your restaurant different from all of the others? Why would people choose you? You need to think this through thoroughly before you try and launch any service to the public.

Speak to any of the world’s most successful people, and they’ll tell you how important it is that you invest time in your business. Have a full-time job? No problem! Michelle Obama, Apple CEO Tim Cook and Twitter CEO Jack Dorsey are all up and working before most of us have hit our first snooze button.

If you want to launch a business, and you don’t have the funds to leave your regular job (which, let’s face it, most of us don’t) , you’re going to need to set your alarm a few hours earlier than you usually would, or skip that Game Of Thrones episode and invest the time in your work instead.

In Richard Branson’s A-Z Of Business videos, his ‘B’ is for bravery.

“To set up a business in the first place you have to be brave. You may end up mortgaging your flat or giving up a good job, and you may fall flat on your face, but without being brave, you’re not going to achieve anything.”

Depending on what it is your business is about, you may have to take some bold steps to get things started. Steve Jobs was fundamental to the success of the iPhone and the iPod, but he failed many times in his life. In 1985 he was fired from Apple, the company he had founded. He later described it as the best thing that ever happened to him.

Apple is now worth $1 trillion. How much of that is due to the bravery of Steve Jobs?

If you’re going to launch your own business, then you are going to have to be brave about it. There aren’t many successful business people who will tell you that they didn’t have to take a risk at some point, but Steve Jobs and Bill Gates have both said that they have used their fear of failure to help them to succeed.

There’s a reason we all use the quote ‘you learn something new every day’. That’s because we do. No matter how old or successful you become, there is always someone who can help you to develop. You must be willing to learn from your mistakes, your successes, and your peers.

Mark Zuckerberg, founder, and CEO of Facebook was mentored by Steve Jobs for much of his business career. In the early days of Facebook, they would meet regularly to discuss the direction of the business. When Jobs died in 2011, Zuckerberg said: “Steve, thank you for being a mentor and a friend. Thanks for showing that what you build can change the world. I will miss you.”

If Mark Zuckerberg, arguably one of the most business savvy individuals of our time, benefitted from a mentor, then you would benefit from one too. Arrange meetings with people who are already where you want to be, absorb their knowledge like a sponge and inject it into everything you do.

5. Finally, passion that transcends a love of money

Passion is the most important part of any business, but it can’t just be about a desire to make money. The most successful business people will tell you that they were motivated by a deep desire to give the people something that they really wanted, and this is what motivated them through the tough decisions, the sleepless nights and the endless meetings with mentors.

Richard Branson founded Virgin Airlines after he became stranded and felt as though the airline responsible for him didn’t care about him as a passenger. He wanted to change that.

“I’m always excited about offering innovative solutions to common problems, even when it means that we’ll be breaking into new industries, and I’m deeply committed to initiatives that tackle global issues – from climate change to the failed war on drugs, to abolishing the death penalty.”

Earning money should be an added bonus to building a business that allows you to do something that you care about; otherwise, you won’t be willing to answer emails at 2am or take phone calls on Saturdays, but you’ll probably need to do both to make your business successful. If you only care about the money your customers are giving you, then you won’t do your best job for them, and then your business won’t last long.

Are you an entrepreneur or small business owner? If so, it’s important to make sure your business and reputation are protected in the event of a third party claim.

Check out our range of insurance products for small business owners here.